“The United States of America vs. Gavin Newsom, et al.- 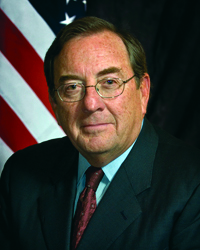 A Criminal Prosecution for RICO Violations”

Mr. Russoniello is a renowned Bay Area attorney specializing in litigation, business crimes and regulatory defense. He served twice as U.S. Attorney for the Northern District of California which encompasses 15 counties from the Oregon-California border to Monterey, including San Francisco. His first term lasted from 1982 to 1990 when he had been appointed by President Ronald Reagan while his second appointment came from President George W. Bush and continued from 2008 to 2010.

Mr. Russoniello spent the 17 years between his two U.S. Attorney appointments in private practice as a Senior Counsel at a San Francisco law firm and also served as Dean of the San Francisco Law School for 5 ½ years until the summer of 2007 before returning as U.S. Attorney for the second time.

You might recall some of the high profile cases he was part of including the prosecution of Larry Layton of the ‘Peoples Temple’ for his involvement in the murder of Congressman Leo Ryan in Jonestown, Guyana, overseeing the prosecution of Barry Bonds on perjury charges, and also of Ed Jew, former Member of the San Francisco Board of Supervisors on charges of extortion and bribery.

Since Joe’s retirement in the summer of 2010 he spends his time partially in the Bay Area and partially in Arizona. We hear so much about California suing President Trump. Please join us for a discussion of why the federal government could criminally prosecute certain California office holders for violation of “RICO”, the Racketeer Influenced and Corrupt Organizations Act.